My first full winter in Northumberland is drawing to a close, I hope. As we enter the second half of January I feel that the darkest days are definitely over. Yesterday felt brighter all round. Sun hit places it hasn’t visited for at least two months and despite the chilly temperatures it felt like a corner of sorts had been turned.

My last house was half a mile from the sea and therefore slightly milder, according to all the books. We have also lived through some of the warmest winters on record so prolonged periods of sub-zero temperatures were rare. This winter has been genuinely cold, whether because of my new inland and elevated location or just because it has been a colder winter. Whatever the reason, I have had garden casualties.

Pelargoniums were caught by early frosts in November and hit hard. Many may not survive but if they do not, I will buy more. They are relatively cheap and look great in late August and September.

My small succulent collection was nobbled by a burst pipe in December. I had stored them under our raised deck\balcony away from excessive wet but a pipe that serves the outdoor taps came loose and sprayed them liberally for a couple of hours before we noticed. Most have turned to mush, tragically.

I have also lost half a dozen clay pots, shattered by frost. I think this has been a combination of cold as well as over-full pots. As the compost froze it expanded but had nowhere to go and so popped the, admittedly cheap, pots. A couple of lessons learned there!

It was -5C this morning. Frosty. Crunchy. So cold, in fact, that it hurt a little bit to take the first outdoor breath.

Recent winters have not been like this. Recent winters have been damp and grey with hardly any really cold spells. It didn’t really snow at all last winter that I recall. Yet this winter already, In January, we’ve had a couple of snowfalls that lasted longer than one day and four or five really cold snaps where the mercury dropped well below zero for a few days at a time and windscreens needed de-icing as we set out for work.

From a garden perspective this prolonged cold is good. Cold can kill slugs and snails as well as fungal spores – something we have suffered from a lot in recent years. Of course it doesn’t kill them all but it does mean that once temperatures and light levels rise in late March, emerging shoots are less likely to be grazed off immediately by lurking molluscs and damp conditions don’t immediately mean blackspot on roses in May.

On the other hand, I’ve already lost three clay pots to the frost – shards falling away as the compost inside swells against its confines. Admittedly, these were cheap garden centre pots and it means I can sneakily replace them with newer [and therefore more expensive and beautiful] ones before my wife notices.

A bit of sunshine and light is a good thing when the days begin to shorten. With this in mind we headed off to Cordoba a couple of weeks ago for both. And to see some beautiful architecture and gardens. And to eat some nice Spanish food.

The most famous horticultural destination in Cordoba is the Alcazar de los Reyes Cristianos, the Islamic gardens attached to the fortress (Alcazar) in the old town. Like their more famous cousin, the Alhambra in nearby Granada, they are heralded as archetypal pleasure gardens from a time when Spain was an Islamic country.

Unlike the Alhambra, you get to see a breath-taking vista of most of the Alcazar gardens in one go. Set out over three terraces, the gardens frame three long rectangular pools that stretch away from you as you enter the site and you get an elevated view of these as soon as you enter the gardens themselves. In one sumptuous view you have a snapshot of classical Islamic gardening laid out before you and it is almost impossible to resist taking a photo or five. It is quite breath-taking right from the off.

You descend into the gardens themselves via stone steps to the side of two slightly raised square pools that are set into a stone terrace. The first of the bigger set-piece pools you meet has a double row of simple water jets playing in from edge to centre and is flanked by orange trees and seasonal planting near the water. It is just what you imagine an Islamic garden to be although the water jets are probably a much later addition.

To either side of the pool are smaller, separate garden areas with beds edged in box and containing colourful annuals, roses and herbaceous perennials. Some seem to be struggling with the Andalucian climate but even in October there was plenty of vivid colour to enjoy. In one bed a pomegranate tree was hung with fruit like early Christmas baubles.

In truth there are delights in every corner of this main part of the Alcazar, none more welcome than the ever present and ever fragrant jasmine clothing the low walls that scent the air so deliciously as you brush past. How I wish it would flourish so well in my Northumberland garden.

The second split-pool and the lowest part of the garden is guarded by statuesque, columnar cypress trees in orderly rows. This late in the year some were a little straggly and had broken the constraining wires to sprawl a little inelegantly like a dancer overflowing her restrictive corsetry after a show. In October there is less colour in this part of the garden but the clean, simple lines and geometric layout more than make up for that.

At the far end of the garden against the boundary wall is a pecan tree that had nuts within easy reach on the day we visited. We borrowed a couple. Looking quite similar to a walnut tree and with similar, if elongated fruit, it cast some welcome shade in this sunnier end of the Alcazar. Looking back up the garden from here you get a wonderful view with the fortress standing stoically behind the orange trees and soaring palms.

It is best to visit the gardens early in the morning, if only to take pictures without hundreds of strangers occupying your snaps. You can also freely wander the large site, hopping from area to area as the will takes you and not be carried along by the crowds.

This is a magical place and well worth a visit.

After many years of thinking and planning and visiting houses we finally made the plunge earlier this year and moved out of the city.

We moved 30 miles west to a country town with a fairly modern house, a steep garden and fabulous views over the Tyne valley. We love it.

All in all we have three gardens; a front garden comprising two smallish beds, one in front of the house that gets sun and has the white walls of the house as a backdrop and the other a slither of soil in a damp, shady raised bed on the other site of the drive.

There’s a small courtyard garden behind the garage and overlooked by large windows from the house. This bounded by hedges and is mostly paved but with raised brick planting beds.

At the back of the house is a steeply sloping garden about 25m wide and about ten metres long. It is populated by conifers. About 40 of them. Most of them in a long row across the width of the garden but thankfully not a hedge. The plan is to remove them and have a long mixed border.

I also need to construct a level area upon which to build a greenhouse that we bought on impulse at RHS Tatton park in July.

Poor old Iris reticulate and its familial cousins such as Iris danfordiae and Iris histrioides, they barely get a look in when the Galanthophiles hit the gardening magazines at this time of year. You can barely turn a page without being urged to visit your nearest snowdrop walk. No-one does that for early bulbous irises and its such a shame as they are such a shot of intense colour in a grey month. Really easy and really cheap they should be grown more often.

It’s great to read that another Northern garden is on the drawing board for the RHS.

News in this month’s The Garden magazine tells us that the new garden will be sited at Salford in Manchester and is to be called RHS Garden Bridgewater Currently an empty and derelict site of 10 acres, work will soon begin to create an education centre, glasshouses and ornamental terraces.

Such a stupidly long time since I posted anything, so let’s see if I can remember what happened!?!

I took down the #greenhouse in the garden during April. Such a tough thing to do as it had served me so well for 12 years; raising seedlings, overwintering plants and providing us with tomatoes, winter salads and basil. However, it was a cheap purchase and had started to sag and warp and one corner had separated completely. Rather than have it come crashing down on my head it was taken down. No tomatoes this year! 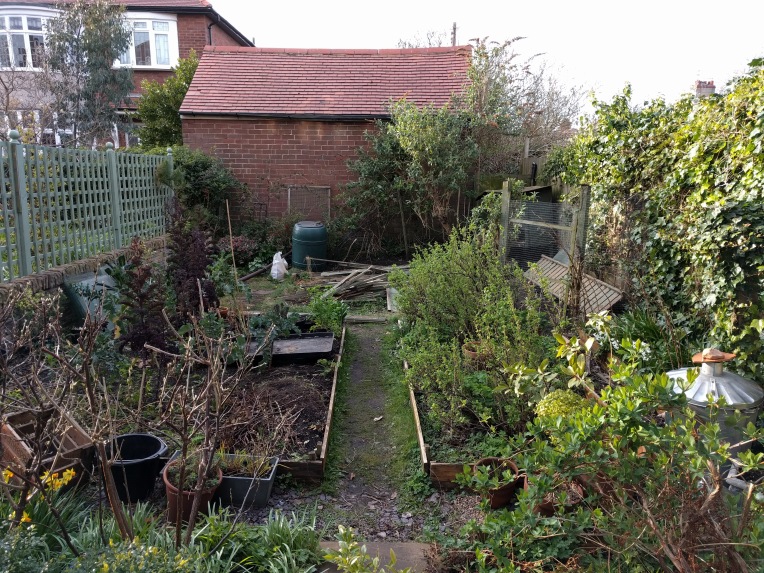